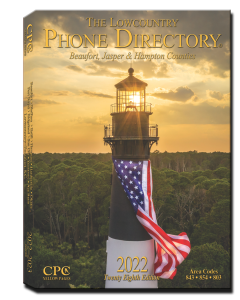 BEAUFORT, SC (May 13, 2022) — The haul of prizes earned by the Lowcountry Phone Directory keeps growing. So does publisher Brent Cooper’s thank-you list.
The local phone book published by CPC Yellow Pages captured eight prizes in the Association of Directory Publishers’ annual awards competition, including Publisher of the Year honors for the second consecutive year.
In all, the Lowcountry Phone Directory has won 31 ADP awards in the past four years.
“We’ve had an outstanding run of success,” said Cooper, who has spent most of his life in Beaufort and has owned the phone directory since 1994. “I think we owe that success to our readers and our advertisers because they just ‘get’ what we’re trying to do — publish a directory that reflects the community it serves.
“I have a great staff, of course, but our community contributors are responsible for so much of what makes our phone book unique and enduring.”
Case in point: The directory took first place for Excellence in Cover Design and Art Print for a photograph of the Hunting Island lighthouse submitted by local photographer Delk Haigler.
The image was one of dozens submitted by local photographers vying for the cover, which has become an annual tradition. Haigler’s shot also helped the Lowcountry Phone Directory win first place for Excellence in Cover Design and Art Product Branding, an award it has now won three consecutive years.
Award winners were announced May 5, during the ADP’s annual conference in Orlando, Fla.
CPC Yellow Pages has also won Publisher of the Year in three of the past four years, including 2021 and 2022. ADP President and CEO Cindi Aldrich commended Cooper for the accomplishment.
“Back-to-back Publisher of the Year wins in the Directory Excellence Awards competition is the ultimate mark of distinction,” Aldrich said. “CPC Yellow Pages won in numerous categories in a competition judged by its peers, and (Cooper’s) company was justly recognized as the best of the best by members of the directory publishing industry.”
In all, the Lowcountry Phone Directory won eight awards:
● Publisher of the Year;
● Excellence in Cover Design and Art Print, first place, Hunting Island Lighthouse, Delk Haigler photographer;
● Excellence in Cover Design and Art Product Branding, 1st place: Delk Haigler
(2022), Jane Marti (2021), Phil Heim(2020)
● Excellence in Directory Ad Effectiveness & Design, first place, The Retreat at Lady’s Island;
● Excellence in Marketing Sales Support Collateral, first place, Marv’s Outboard Motor Repair;
● Excellence in Marketing Direct Mail, Contest, Magazine, Newspaper, Outdoor or Event, first place, directory photo contest, best newspaper advertisement (The Island News), best outdoor advertising (Marlin Signs) and Beaufort Regional Chamber of Commerce e-flash;
● Excellence in Marketing Best Advertiser’s Website, third place, The Woodshop, www.WoodshopCustomShutters.com;
● Excellence in Marketing Industry Innovation, third place, Schiller & Hamilton Law Firm, front cover magnet.
The 2022 directory — the company’s 28th — was mailed this April to customers in Beaufort, Jasper, Hampton and Colleton counties. In addition to residential and business listings, it includes profiles of prominent area residents, images captured by local photographers, a newcomer’s guide, and hurricane tracking and evacuation maps. CPC prints his Yellow Pages on magazine-quality stock and uses call tracking to help advertisers measure the return on their purchases. They also deliver most of the press run through the U.S. Mail and via distribution locations rather than tossing them unprotected onto residents’ driveways and dirt roads.

ADP was founded in 1898 and includes members from the U.S., Canada, Germany and the Virgin Islands. Its Gold Book Awards are a jury- and peer-voted recognition of outstanding Yellow Pages production and marketing.
###