BEAUFORT, SC (May 24, 2021) — Even by Brent Cooper’s standards, this was a once-in-a-lifetime haul of awards.
The Lowcountry Phone Directory captured eight prizes in the Association of Directory Publishers’ annual awards competition for Yellow Pages publishers, and the company’s owner was also recognized for his lifetime achievements. Cooper was bestowed the Wil Lewis Award, given on occasion by the ADP board of directors to recognize exceptional contributions to the industry.
“It’s hard to describe just how honored I am to be recognized by peers I respect so much,” said Cooper, who has spent most of his life in Beaufort and has owned the Lady’s Island-based phone directory since 1994. “This is really a tribute to my parents, who taught me so much about the publishing industry; my hard-working staff; and, of course, the Yellow Pages customers we serve.”
The Lowcountry Phone Directory also was named the Directory of the Year among phone books with a distribution of over 50,001. It marked the third consecutive year in which the directory took this top prize. CPC also won the Publisher of the Year Award.
In all, the Lowcountry Phone Directory has won 23 ADP awards in just the past three years.
ADP was founded in 1898 and includes members from the U.S., Canada and several other nations. Its Directory Excellence Awards, presented May 13 at the association’s national conference in Memphis, Tenn., are a judge – and peer-voted recognition of outstanding Yellow Pages production and marketing.
The 2021 directory — the company’s 27th — was mailed this March to customers in Beaufort, Jasper, Hampton and Colleton counties. In addition to residential and business listings, it includes profiles of prominent area residents, images captured by local photographers, a newcomers guide, and hurricane tracking and evacuation maps. Cooper prints his Yellow Pages on magazine-quality stock and uses call tracking to help advertisers measure the return on their investment. He also delivers most of its press run — about 77,000 copies — through the U.S. Mail.
These innovations explain Cooper’s success, but they aren’t exactly “secrets,” Richard Peterson of Florida-based Direct Data Corporation noted in nominating Cooper for the Wil Lewis Award.
He wrote that Cooper believes “our companies and its directory products are stronger and more vibrant when ideas are shared that benefit all members. He has a strong desire to inform and share with his fellow publishers the methods that have worked well for him.”
“I’ve known Brent for many years and this man has his ear to the ground and understands what’s truly happening in our industry,” added ADP President and CEO Cindi Aldrich in announcing the award.
In addition to Cooper’s lifetime achievement award and directory of the year honors, the Lowcountry Phone Directory won the following awards in this year’s ADP competition:
● First place, Excellence in Marketing Industry Innovation;
● First place, Excellence in Marketing Sales Support Collateral;
● First place, Excellence in Marketing Direct Mail, Contest, Magazine, Newspaper, Outdoor or Event;
● First place, Excellence in Directory Ad Effectiveness and Design;
● Second place, Excellence in Cover Design and Art Print;
● Second place, Excellence in Cover Design and Product Branding;
● Third place, Excellence in Marketing Advertisers Website.
### 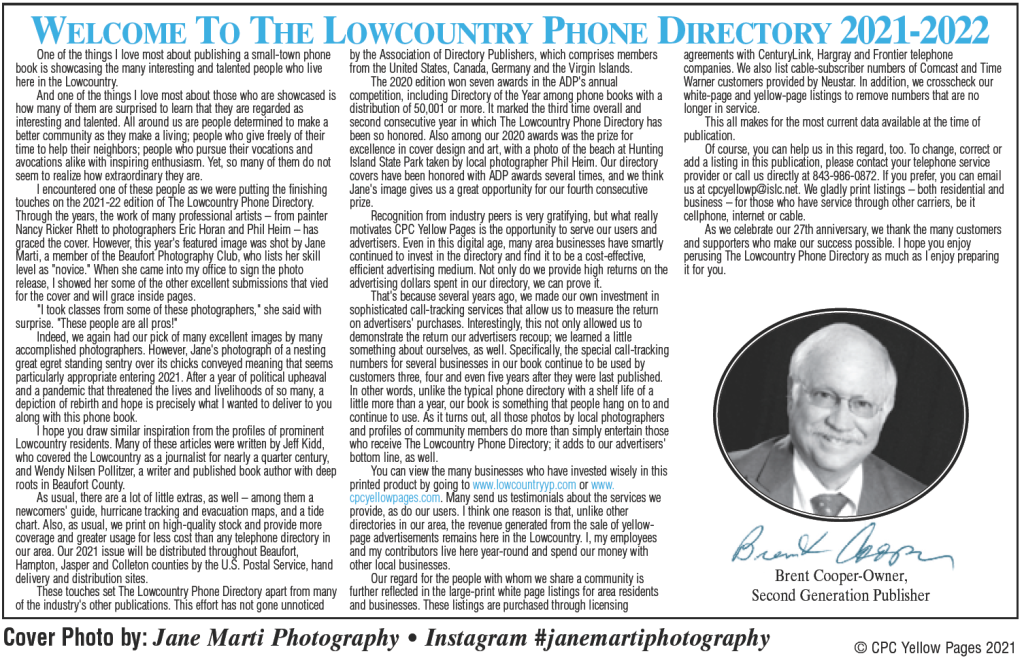 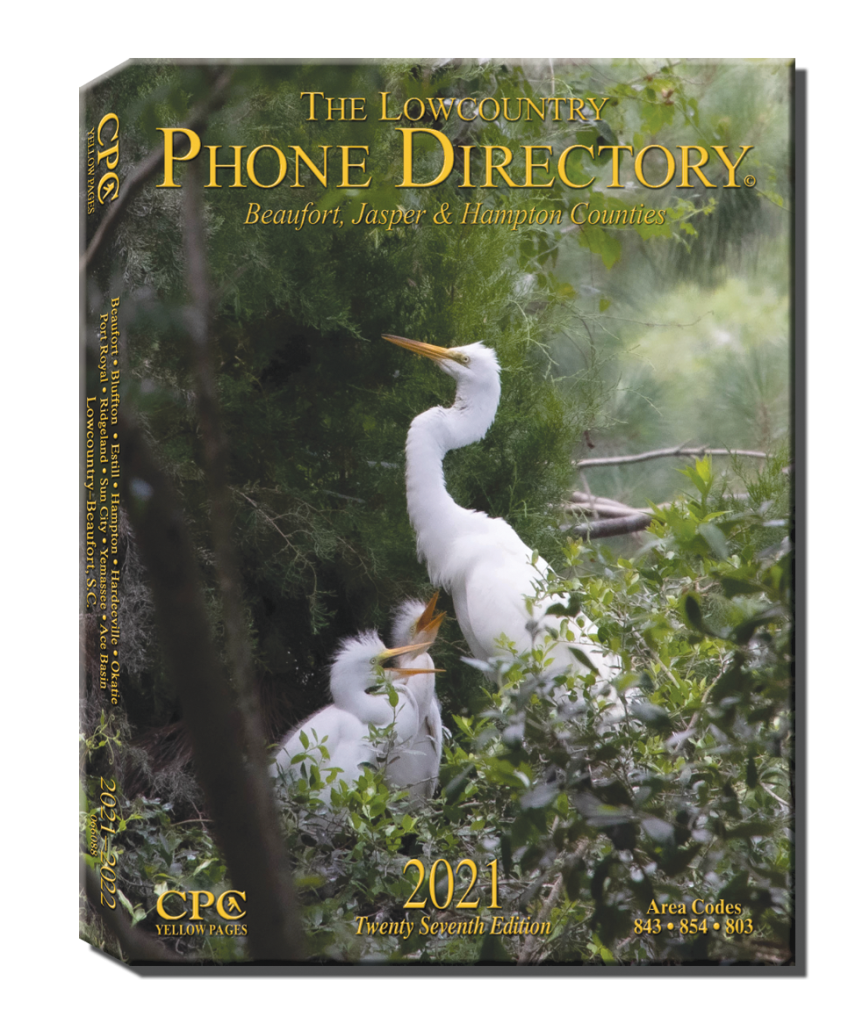 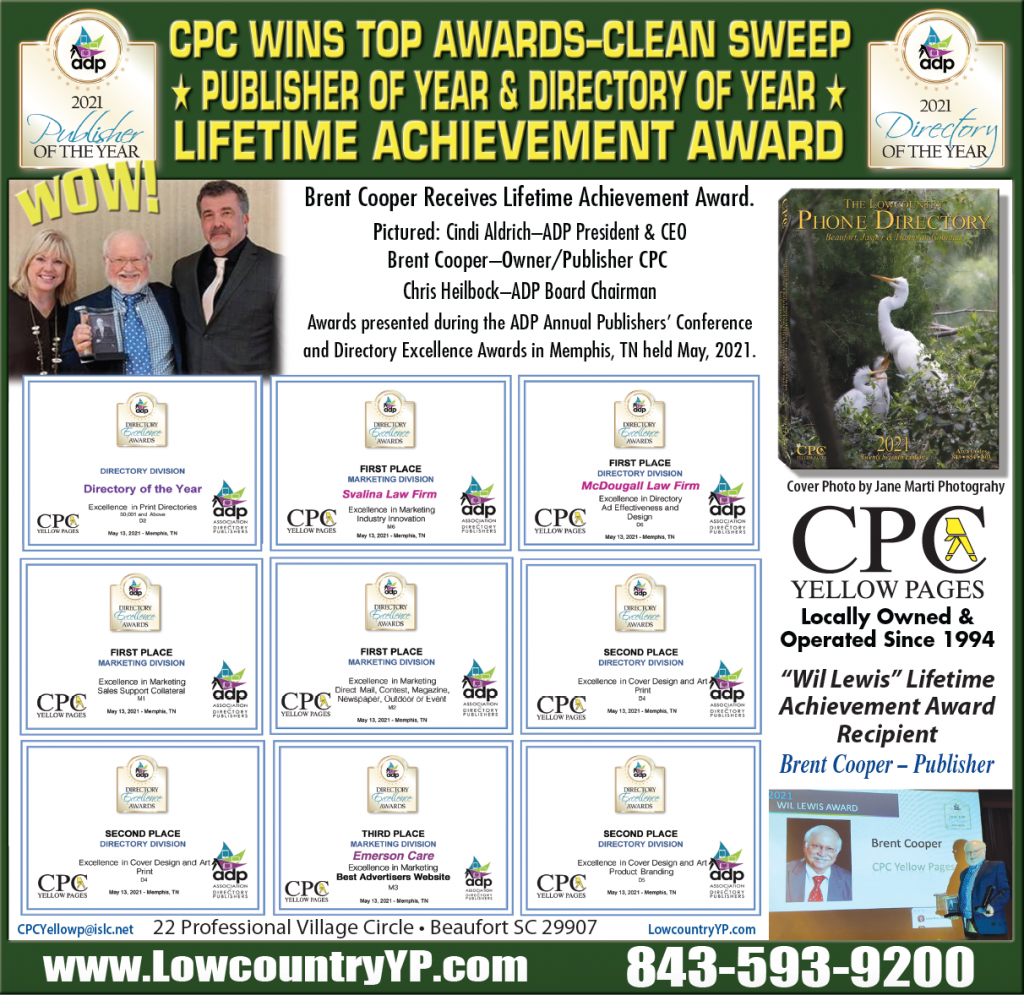